Not Staying In, Not Going Out - Part 1

We're stuck in the strictest lockdown since the crisis began.....Boo!

That sums up the current status here in The Netherlands.

Luckily throughout the whole Corona period we have been allowed to play outside. Sports clubs and sporting facilities have been closed and organised sports banned for most of us but individual excercise outdoors, subject to the frequently changing restrictions, are okay. Those who would usually be taking part in other sports , who have more time on there hands or just need to get out for while have joined the regulars, running, cycling and walking. Bike and sportswear shops can barely keep up with the demand. It's easy to spot the new kids on the block. They either have shiny new bicycles or they are riding antique models rescued from their dad's garage. Likewise the runners are wearing the trendiest and cleanest running gear or baggy shorts with a top and shoes they had purchased years ago when on an impulse they had signed up for tennis lessons.

But this is just the tip of the iceberg!  You can add to this a mass of people, whole families of city dwellers, who unable to visit shopping malls or garden centres, have decided to give  nature a try. These are also easy to spot; fashionable rather than functional clothing, small boys carrying redundant footballs and little girls with pink scooters that don't work on the soft and sandy paths.

This all puts a great deal of pressure on the available natural open spaces in this small and relatively densely populated country. The government have advised people to 'drive a little further' in order to avoid  congestion at well known hot spots like the woods close to where I live. Quite a few follow the advice. So not only are there more people, they are now spread over a greater area. Causing some problems where there is no infrastructure to cope with the extra visitors and some friction with and between the hikers, bikers and nature lovers who already frequent these places to avoid the greater public.

Early last year riding across a favourite heath on a sunny Sunday during an otherwise grey, wet and windy period I was surprised so to see so many people. Not for the first time a dog-walker growled loudly and angrily at me as I passed. I had previously decided that the next time this happened I would stop for a calm chat. I stopped but the man was far from calm and obviously was not in the mood for a chat of any kind. He launched into a long tirade at the end of which, as he reached boiling point, he said that we (I was alone) should bugger off and take my bike with me!!

Now , I would have replied that I've been coming here for more than 25 years which was almost certainly longer than he  had. That I had even lived at the corner of the nature park for a while. That, if I had known that it would be so busy, I would have chosen another route. I would have pointed out that although there are anti-social mountain bikers and dog-owners, the most are not.  If I had met him a little later in the day I could also have remarked that everybody else I saw that day, hikers, bikers, dog-owners, pram-pushers and horse riders, were all friendly and quite happy to share the sunshine and the limited countryside we have.

I would have liked to have explained that the world would be a much better place if we all learned to get on with each other, runners, walkers, mountain  bikers, horse riders, people who think differently, have different skin colours, cultural backgrounds, religions and sexual orientations. Whether we like it or not other people, and groups of people, exist and they are not about to go away. Why not just accept the fact and get on with life!

However I didn't say any of the above. His face was getting redder and redder. I was afraid he might at any minute burst or have a heart attack. Not that him having a heart attack itself would have worried me very much but I would have felt obliged to help him and that  really would have pissed me off!! 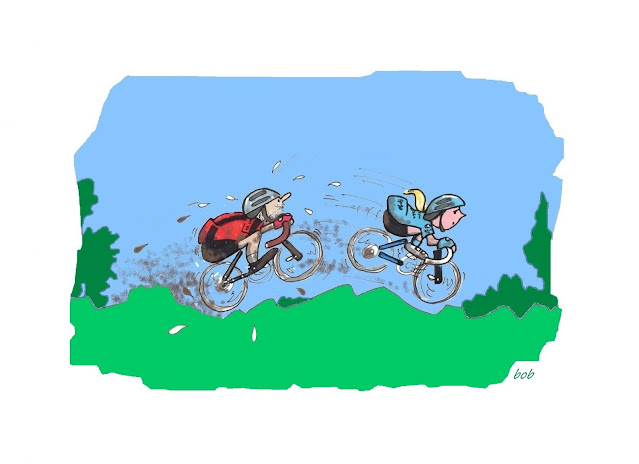 Bob Powers
British national, living in The Netherlands, close to the Belgian border.